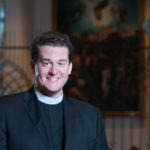 My wife, Malacy, has to fly out of state frequently for her work, but occasionally she has to drive over to Miami for a jobsite. And when she does, we swap cars, because mine gets better gas mileage.

And I am learning so much about her! You can discover all sorts of things by listening to someone’s pre-set radio stations!

All of hers are set to talk-radio – and not the political stuff, but the relationship advice stations. I personally find this stuff way too sappy in a very greeting card sort of way. But she likes it, and that’s totally her prerogative.

On my way to the early mass last Wednesday morning, I decided to snoop a little bit. I had time to cycle through her first three presets— with about three minutes or so on each station.

And every time I clicked to the next one —I kid you not— the very same thing was happening: a distressed career wife was asking for help with her very difficult husband!

I don’t think this swapping cars thing has anything to do with gas mileage at all! Have YOU ever been the victim of intentionally placed subliminal messaging?

Well, that stuff works! And I know it works because all her presets convinced me, yet again, that asking for help in life is crucial, and it really does change everything. And that’s the simple premise of this little homily: asking for help changes everything.

“During the night Paul had a vision: there stood a man of Macedonia pleading with him and saying, “Come over to Macedonia and help us.” And it changed the world.

I want to tell you how you and I, very practically, can have our own version of a Macedonian call — how you and I can ask for help and how helping someone else can change our lives.

And if this sounds impossible, just look again at today’s reading from the Book of Acts.  Before the call for help, St. Paul and his companions had big plans for building up the Church in Asia—in what is modern day Turkey.

Imagine if Saint Paul didn’t cross from Asia into Europe? If no church in Europe, then no Church in, and of, England. And that means no Episcopal Church, and that means, conceivably, no Redeemer!  I’m not exaggerating. Asking for help changes everything.

But I’ve noticed there is a lot of confusion out there about what genuine help actually is. Much of what passes for help lacks any real substance.

I hope you know when friends ask us for help, they are not looking for a pill or a program. They really aren’t even asking for advice. Even if they can’t articulate it, what they are really looking for is an encounter with what Henri Nouwen and Carl Jung called a “wounded healer.” Do you know that term? Well, let’s talk about it.

Wounded healers are folks just like you and me who’ve been bruised—been cut—by the trials and travails of life, yet they are learning, by the power of grace, not to hide their wounds by pretending to be artificially strong, and they’re beginning to genuinely help others through their wounds—not their worldly wisdom.
And this is radical stuff. Just as we are saved by His wounds, it turns out that we can use our own wounds and hurts to genuinely help others. And you know this is true, because when it happens to you it’s transformative –I’m bowled over when it happens to me.

Nobody escapes being wounded. We all are wounded people, whether physically, emotionally, mentally, or spiritually. The main question is not “How can we hide our wounds?” so we don’t have to be embarrassed, but “How can we put our woundedness in the service of others?” When our wounds cease to be a source of shame, and become a source of healing, we have become wounded healers.

It works like this: When your friend calls and tells you she married an alcoholic and workaholic husband, don’t read Web MD to her! Don’t Google “alcoholism.” Open your own wound; tell her about your father’s alcoholism that he tried to hide, and how your family came together and loved the man back to life–how through that outpouring he was able, with the genuine help of others, to abandon his self-destructive behavior.

If you’re more of an abstract thinker, when your daughter calls from Florida State to say she is in big trouble, don’t read the university code of ethics to her! She’s looking for that magnificent image of that morning light piercing through the burned-out shell of the Notre Dame Cathedral after the big fire. Do you remember that picture? Tell her about your own fire, because sooner or later everybody’s shell goes down in flames. Be the light piercing the darkness of that burned out shell.
The Church, at her best, is a community of wounded healers—persons who ask for help and in turn willingly and joyfully help others. In a world trying to portray self-control and emotional regulation this is real power—the power of love.

That great 20th century theologian, Diana Ross, sang it like this: “Reach out and touch somebody’s hand; and make this world a better place if you can.”

And that’s point one. Point two (and I only have two points) is this. We all call it “help,” but what we’re really talking about is hope. The Macedonian call for help is a call for hope. “We immediately tried to cross over to Macedonia, being convinced that God had called us to proclaim the good news to them.”

What is hope? What is the “the good news” of the Gospel of Jesus Christ?”

The angel in the graveyard explained it like this: “He is not here; he is risen. Do not be afraid” (compilation from resurrection gospels).

A friend of mine in Alabama wrote a book a few years back called Safe Passage: Thinking Clearly About Life and Death, and about half-way into the book he tells a story about a group of Allied soldiers who were stuck in a filthy, German prison camp towards the end of World War II. They’d surely endured starvation and beatings, and they were prone to utter despair.

He explains how the Americans built and hid a makeshift radio, after the German communications had been knocked out in an Allied bombing, so the prisoners knew about Germany’s surrender three days before the German guards:

For those three days, the prisoners were hardly recognizable. They sang, waved at guards, laughed at the German shepherd dogs and shared jokes over meals. This is how God intends for His people to live, with great joy as we anticipate the future, because…He has told us what our ultimate destiny is going to be.

The Angel provided hope to despairing disciples: “He is not here. He is risen. Do not be afraid.”

Writing later on to one of his Macedonian churches, St. Paul wrote these words:

Now may our Lord Jesus Christ himself, and God our Father, who loved us and gave us eternal comfort and good hope through grace, comfort your hearts and establish them in every good work and word.