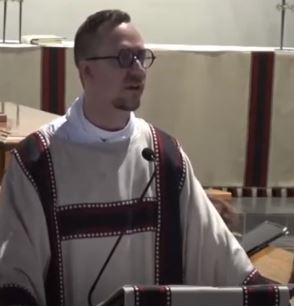 From today’s Epistle: “Therefore, Abraham’s faith was reckoned to him as righteousness.”

Most of us are familiar with the plight of Charlie Brown. Year after year, when football season starts, Charlie Brown asks Lucy to hold the football for him in the hope that he will finally be able to kick it and send it soaring through the air. And. Every. Time, Lucy pulls the football out from under him. And Charlie Brown ends up on his back in pain.

The next time Charlie Brown sees Lucy holding a football, he won’t even give her a chance to talk. “You must think I’m crazy” he says, “You say you’ll hold the ball, but you won’t. You’ll pull it away and I’ll fall again.”

“Why Charlie Brown, I wouldn’t think of such a thing,” insists Lucy, smiling calmly. “I’m a changed person, isn’t this a face you can trust?”

Trust, as the saying goes, is hard to earn and easy to lose.

Any therapist worth her salt is going to tell you about the importance of trust in a healthy relationship.

As one author puts it, “Trust is the one principle of relationships we know we must have to be successful in our own lives, in our teams and our organizations. And yet it is the most elusive for us. It is an amorphous quality of relationships — we can’t touch it, hear it or see it. But we can feel it. We know when we are trusted and when we trust another.

In other words, trust is incredibly important for a fulfilled life,

But what if trust extends beyond our relationships with other people?

In fact, I would submit to you that trust is the basis of our relationship with God.

In the passage we just heard from Romans 4, St. Paul outlines two different ways of relating to God.

And this raises the question for us today: How are we relating to God?

You see, many in Paul’s Roman audience believed there were several steps to being in right relationship with God, several steps one needed in order to be justified or righteous before God.

For men, this included being circumcised. And for everyone it meant observing the law of Moses.

Oh, trust in God’s promise was important but you had to do this other stuff, too.

As we heard in the Old Testament lesson from Genesis, God called Abraham, and made a promise to him.

At this point it is important for us to ask the question, “What was Abraham doing when God called him?”

Was Abraham an especially pious and holy man, whom God saw and decided to bless?

Someone with an excellent resume of good works?  Maybe he helped old ladies cross the street? Or at the very least had been circumcised by now?

His answer is none of the above.

When God called Abraham, he was just a nomad living beyond the river Euphrates who worshiped other gods

Abraham wasn’t an Israelite – he was a pagan Gentile.

The entire Israelite nation descends from a Gentile who God called and to whom he made a promise.

In complete grace, God comes to this undeserving idol worshiper and says, with life-creating authority:

“I am going to bless you, and through you bring blessing to the whole world.” So begins the history of God’s people.

The only thing Abraham did was say “Ok” to God’s promise. To trust God and take him at his word.

As St. Paul points out, “Abraham’s faith was reckoned to him as righteousness.”

Abraham’s relationship with God was based on trust. And it is the same for us today.

It is so easy for us to believe to the opposite, that our relationship with God is based on the law, that we need to do enough, and then God will love us.

But we can never do enough.

As the 16th century theologian Martin Luther put it, “The law says, ‘do this,’ and it is never done…”

But St. Paul shows us a better way: The promise of God. A promise fulfilled in the life, death, and resurrection of Jesus Christ. A promise we can trust. A relationship with God, based on trust rather than law.

Or as Luther put it:

Now glad, bold, and happy are not words we usually associate with the season of Lent, and rightly so since Lent is a season of preparation, prayer, penitence, almsgiving. And it is very easy for us to think of it as a way of earning Brownie points with God because it is hard for us to believe that our relationship with God is based on trust in his gracious promise in Christ.

We are afraid that God might pull the football out from under us, so we see Lent as a giant “to do” list, and then we’re filled with either pride or despair depending on how well we keep our “to do” list.

But Lent is really an invitation to become like Abraham, to realize our unworthiness in ourselves and to cry out to Jesus for mercy.

The practices of Lent are not a way to try to change God’s mind about us because, in Christ, God has made up his mind about each of us already. He sees you and me and he loves us.

Rather, the practices of Lent are a way for us to clear away everything distracting us. To open our hearts to God, and like Abraham, to trust him in faith.

And in so doing, be reckoned as righteous in Christ.